An addiction recovery programme for soldiers has been saved by army backing.

They are committed to defending our country. They have risked their lives to keep us safe and we owe them a debt we can never pay. However, it is a sad reality that, while serving in the military, or after leaving active duty, many members of the armed forces face a different battle.

They can, unfortunately, find themselves caught in a web of gambling or alcohol addiction. And they need care and support snd a dedicated addiction recovery programme.

There was a drug and recovery service for soldiers battling dependency, based at the biggest garrison in the UK. It had been helping those in the armed forces struggling with addiction for three years. However, its funding was taken away and it faced closure. Fortunately, the project has been given a bail out by the Army, which will see it carry on for another two years and be extended. 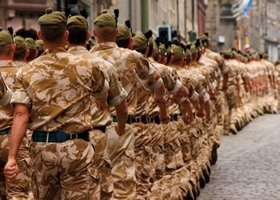 MilSMART has been called the first recovery scheme of its kind in the United Kingdom. It offers care and assistance to armed forces personnel living with gambling or alcohol addiction.

The project was created by Humankind and has been running since 2017. Humankind is a charity offering services and support for various health and social problems. Its work in encompasses drug misuse, alcohol, housing, employment, families, women, children, community, and offender rehabilitation, amongst other areas.

They work in conjunction with North Yorkshire Horizons, an alcohol and drug recovery facility, operating at the behest of the local council. NYHorizons, in collaboration with Spectrum CIC, Changing Lives and Humankind, is dedicated to helping as many people as they can, conquer their addiction.

Both Horizons and Humankind have pulled their resources to set up MilSMART. A prestigious recovery project which has assisted around a hundred servicemen and women whose lives were torn apart by dependency.

The addiction recovery programme is situated at Catterick Garrison, in North Yorkshire, home base of the largest military garrison in Britain. There are fifteen regiments and over eleven thousand soldiers in residence.

The project was being forced into retreat and almost closed its doors due to lack of funding until the Army came to the rescue. Thankfully, with their help, MilSMART is set to continue until 2022. Though the scheme is currently located at Catterick Garrison, it is proposed the service will be expanded to include other bases in England and North of the border.

Many feel this cash injection, and ongoing support for soldiers at the garrison dealing with alcohol addiction can be a big help. There has always been a link between army life and drinking. We have an image of soldiers on R and R painting the town red. However, this can often conceal a deep-seated problem, going beyond letting off steam.  Men are often reluctant to talk about their problems, especially military types who feel they must maintain a reputation for toughness.

Humankind believes receiving the backing of the Army will help shine a light on the addiction problems soldiers may face. It hopes that more may be prepared to come forward and ask for assistance. They could receive the help and support from the MILSMART programme designed specifically for members of the armed forces.  The project is a custom-tailored recovery programme for them.

If soldiers garrisoned at Catterick are experiencing difficulties with alcohol or gambling then there is an outlet available. It will provide the guidance and support services they require.

The Army is also taking steps to increase awareness of the great work the MILSMART programme does.  A programme which will carry on after this year with their financial backing.

If a soldier is struggling day to day with dependency, they can be safe in the knowledge they don’t have to fight it alone, and, by taking that first step and asking for help, the battle is already half won.