A drunk driver was lucky not to be shot when they crashed into an anti-terror bollard.

Everybody knows it’s foolish to get behind the wheel when drinking. You are literally taking your life in your hands and could harm innocent people in the process. However, for a drunk driver in Edinburgh it almost had even more dramatic consequences. It could have resulted in a shooting outside the Scottish Parliament. 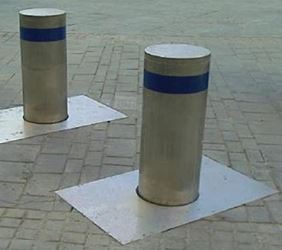 It sounds like something out of a movie, but 26-year-old father Anthony Oldham appeared at Edinburgh Sheriff Court after crashing into the parliament building bollards. He appeared through a prison video link and was told he was lucky not to have been shot. Armed police guard the anti-terror bollards outside the Parliament building in Holyrood. It was these that Mr Oldham drove into while drunk.

He had been speeding in a borrowed Vauxhall Vectra, equipped with a two-litre turbo engine when he lost control. He was seen tearing down the road and across the centre of a roundabout, before smashing into the steel defensives, totalling the vehicle.

The defendant was doing over 40 in a 20mph zone. After the crash he got out of the car and tried to get a taxi to his mother’s house. However, the cabbie refused to take him. Mr Oldham then hit the driver on the side of the face, even though the driver was trying to help him. He then ran off and was reportedly found cowering in the grounds of a primary school close by.

The errant motorist was taken to St Leonards police station and given a breathalyser test. He was found to have 58mg of alcohol in 100ml on his breath; over twice the legal limit of 22mg.

In addition, Oldham had recently been released from prison and was disqualified from driving at the time of the incident. The defendant owned up to dangerous driving and assault. The Sheriff presiding in the case commented he could have been shot by armed cops. Even more of a risk in these heightened times, with the threat of terror on everybody’s mind.

It is not implausible the police could have mistaken his irresponsible behaviour as a possible terrorist incident. However, Mr Oldman’s defence counsel maintained there were no armed officers on hand, as the crash occurred around 5am.

The defence said Oldham was mortified he had hit the cabbie, claiming he had been in shock after the crash. The defendant, who listed his address as Saughton Prison, admitted to driving under the influence and while disqualified. However, it could have been much worse.

A case of drunk driving, which would have been bad enough, could have led to a major shooting incident outside the home of the Scottish government. All because a motorist under the influence lost control of his borrowed car.