People all over the world, from the ordinary person on the street to the rich and famous, have seen their lives disrupted by lockdown. Governments around the globe have imposed strict rules to deal with the pandemic, and while some restrictions may be lifted, people are still being asked to adhere to the guidelines as they currently stand.

Unfortunately, there have been reports of people from all walks of life breaking the rules. In Scotland several footballers were recently criticised for breaking social distancing rules and helping fuel a Covid-19 outbreak. Even a world-class athlete, who has overcome various obstacles off the track, has found himself in trouble for flouting lockdown laws.

Incredibly, the athlete is a former addict who conquered dependency to win Gold and Silver medals at the Olympics. Former champion long jumper, Luvo Manyonga was arrested and faced charges more serious than those of the footballers.  The South African violated his country’s stringent quarantine restrictions and was summoned to appear in court.

Mr Manyonga was ordered to pay an R2500 admission of guilt fine (about £143), but chose to appear in person.

The police notice stated that Manyonga was charged under the Disaster Management Act for failing to confine himself to his residence and public drinking. The legislation prohibits the sale of alcohol and states individuals must stay indoors. The only exceptions are to go shopping for household groceries or items specified by the South African government, or if offering an essential service.

Manyonga was caught in Thubelitsha Park, in the township of Kayamandi, in Stellenbosch, Western Cape. Reportedly, he declared his residence to be Bluewater Bay in Port Elizabeth in the Eastern Cape, but he apparently moved in with relatives in the Western Cape before lockdown began. 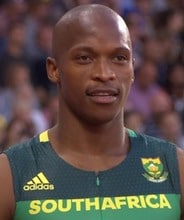 The news he appears to have flouted South Africa’s lockdown restrictions is bound to draw criticism, which he has often faced in the past.

The long jumper had a documented addiction to crystal meth. He was banned from the sport for 18 month after he tested positive for the drug in 2012, causing him to miss that year’s London Olympics.

Fortunately, partly due to the support of family and friends and figures in the sport, Manyonga overcome his addiction in 2015. Later, he attended the High-Performance Centre at the University of Pretoria, and reignited his athletics career, becoming world long jump champion in 2017.

He may be justifiably facing a backlash for breaking quarantine rules, but his achievements are still an inspiration to many.  Someone who escaped from addiction, turned his life around, and became a champion is to be credited.

When battling dependency, every day that you avoid relapse and continue with your recovery makes you a winner. Even if you make mistakes or poor decisions along the way, getting into rehab help puts you on the right path to recovery.