The Scottish Government has decided not to extend licensing hours during lockdown.

There is no doubt many people are using alcohol to make it through the coronavirus crisis, despite the possible ill-effects to their health.

They may be stocking up with beer, wine, or spirits when visiting the supermarket, or stopping at a convenience store. However, there is a limit on when you can purchase alcohol legally in this country and at what time of day.

Some may be concerned about alcohol supplies running low or having to queue, and want to buy booze early. However, it is presently against the law for shops to sell alcohol before 10 a.m. and, considering current events many have called for changes to licensing hours. This would allow people to purchase alcohol earlier in the day. So if they wish to get their shopping when the shops open at eight o’clock, they could buy alcohol without having to wait a couple of hours, or come back later.

Some claim it will make it easier to be sure people will not panic buy or run out.

Calls for relaxation of legislation 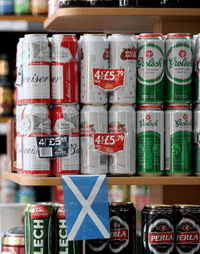 ttish Government rejected the proposal. The possibility of shops and supermarkets being allowed to sell booze before 10 am has previously been debated in parliament. They decided against expanding the country’s licensing hours for the good of the wider population.

Politicians feel, considering the country’s often unhealthy association with booze, increasing licensing hours may only make the situation worse. There are also apparently legal and technical difficulties to consider when amending alcohol laws.

The Scottish Government has been working on a new parliamentary Bill, to assist the public during the Covid-19 crisis. However, many noted it did not mention extending licensing hours.

The government has been consulted on the subject, but feel it could hinder NHS workers or vulnerable groups trying to do their shopping. Allowing other customers to buy alcohol earlier could impinge on the time set aside for key workers.

However, those supporting a change say it might help front line workers wanting to buy alcohol before 10am. This is an interesting point, but, although the government has deliberated the proposal, it has not been included in the Bill. The issue may be discussed further if an amendment is brought forward. Any change in legislation may be minor and carefully drawn to only last during the crisis. So, if licensing hours were to increase, they would revert to normal as soon as restrictions were lifted.

The pandemic altered life, and now, if you want to buy alcohol, you’ll have to wait until 10am. This may be a time of great change, but some things stay the same.