Scotrail is stopping alcohol consumption on trains and in stations

Scotrail has announced there will be no booze on trains in a response to the coronavirus outbreak. However, it may only be a temporary measure.

All the way through the pandemic, people have had to live with restrictions. We have seen pubs, bars, and restaurants being forced to shut their doors, closing early, or prevented from serving alcohol. It seems drinkers are running out of places they can imbibe. Now this is extending to the travel industry and it is a move which may be controversial. It could be widely supported in some areas but unwelcome in others.

This came with the announcement from Scotrail that, as of Monday the 14th of November, no alcohol can be consumed on a train or in a station. It’s a temporary policy for now, imposed to back public health measures, improve safety and stop the spread of the coronavirus.

The decision to stop serving alcohol and preventing passengers from drinking their own booze onboard, is seen as a necessary step. Scotrail think it will help maintain physical distancing and ensure the wearing of face masks.  Others think they should be allowed to have a glass of wine to relax on their way home after a hard week.  Or that the hard hit tourist industry will be further impacted if people cannot enjoy some fizz on the way to a special overnight trip.

Previously booze on trains was allowed at certain times

Before the new policy was implemented, commuters on ScotRail services were prohibited from consuming alcohol from nine o’clock at night to ten in the morning. Now they cannot drink at all, even in the station.

The major train operator says the measures will be under constant review, given the ever-changing government guidelines. 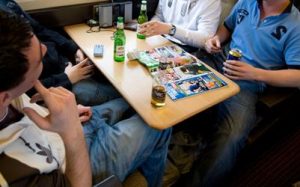 The ban was imposed because intoxicated people may be less inclined to follow social distancing rules. This can be especially difficult in confined spaces like a train carriage. However, Scotrail maintains the ban is just part of their ongoing commitment to keep their employees and customers safe. They have the support of the British Transport Police, who are offering rail staff all the assistance they require to implement the measures.  Might the ban be a help for people who struggle with alcohol consumption and don’t need to see temptation everywhere?

The decision to prohibit alcohol on trains also has the backing of the rail union, the RMT. They are also behind members like ticket collectors wearing body cameras to make sure travellers are adhering to the rules.

The pandemic has changed almost every aspect of our lives, and public travel is no different. We are all encouraged to keep ourselves and others safe and healthy. Scotrail, for the moment, has banned people from consuming on trains. It may only be a temporary measure but is it possible it may have changed the face of public transport forever? So that having a drink on a train journey may be a thing of the past.